Next week, Arkansas will start up what many are calling an “assembly line of death”. Don. Bruce. Stacey. Ledell. Jack. Marcel. Jason. Kenneth. These are the eight men that Arkansas plans to execute over the course of ten days.

Eight executions in ten days is more than any state has undergone since the Supreme Court reinstated the capital punishment in 1976. So why the rush? Arkansas has exactly eight doses left of a crucial drug used to perform lethal injections, and it’s set to expire at the end of April. So, Governor Asa Hutchinson has scheduled eight executions packed into a ten-day period – as if the justice system was a conveyor belt. This rush to execute is wrong and reckless.

END_OF_DOCUMENT_TOKEN_TO_BE_REPLACED 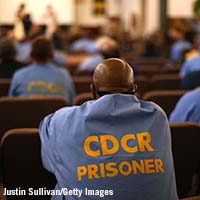 Officials at the California Department of Corrections and Rehabilitation (CDCR) are doing everything they can to jumpstart executions after over a decade without them — and with the largest death row in the country, they could fast track dozens of cases for execution.

In order to resume executions, California needs to pass a new lethal injection procedure. That’s where you come in: by state law, new procedures must go through a Public Comment Period.

That means anyone in the world, in any language, can send in a comment. The CDCR is required to READ and RESPOND to every substantive comment.

Click here to let CDCR know there is NO humane way to kill a human being. Take action NOW!

Today, the Connecticut Supreme Court struck down exemptions to the state’s 2012 death penalty ban, which had excluded the 11 inmates currently on death row. In response, James Clark, Amnesty International USA’s senior campaigner on the death penalty, released the following statement:

“It’s encouraging that the court determined that the death penalty fails to meet ‘contemporary standards of decency’ and serves no ‘legitimate penological purpose.’ Connecticut can now stand fully among the 19 states, plus the District of Columbia, that have abolished the death penalty.”

END_OF_DOCUMENT_TOKEN_TO_BE_REPLACED

Today the Nebraska legislature voted to override Governor Ricketts’ veto of a measure repealing the death penalty. Nebraska will now become the 19th U.S. state to abolish capital punishment, and the seventh state to repeal the death penalty in the past eight years.

“Nebraska’s legislature has bravely stood up for human rights by upholding this bill,” said Steven W. Hawkins, executive director of Amnesty International USA. “As the nation and the world continue to abandon this broken and unjust punishment, it is only a matter of time before the 31 remaining states end the death penalty forever.”

Amnesty International has documented a steady decline in the use of the death penalty in the United States and around the world. In addition to the 19 states plus the District of Columbia that have abolished the death penalty, seven more states have not carried out an execution in 10 years or more. In 2014, only seven states carried out executions.

END_OF_DOCUMENT_TOKEN_TO_BE_REPLACED

In 2011, after three stays of execution and a final appeal to the Supreme Court, Troy Anthony Davis, who was convicted of the 1989 murder of a police officer in Savannah, was executed by the state of Georgia, despite a compelling case of innocence. Prominent human rights advocates, fifty-one members of Congress, and many civil rights and peace and justice organizations, including Amnesty International, NAACP, and National Coalition to Abolish the Death Penalty, had joined his family in a twenty-year fight to prevent his execution and reveal evidence that pointed to Troy’s innocence.

On Thursday, April 10 at 7:30 PM in the First United Methodist Church Fireside Room (1838 SW Jefferson St, Portland), Seattle-based human rights activist, writer, and filmmaker Jen Marlowe will talk about the story of Troy Davis and his family and the human impact of the death penalty detailed in her book, I Am Troy Davis which she co-authored with Davis’ older sister Martina Davis-Correia. Marlowe will be joined by Kimberly Davis, the surviving sister of Troy Davis. They will be introduced by Dr. Audrey Terrell, President of the NAACP Portland Chapter.