Not far from the cheering crowds and spectacular competition of the Sochi Winter Games, Russian authorities are cracking down on critics.

Russian environmental activist Yevgeniy Vitishko has been sent to a penal colony for three years because he would not keep quiet about what he saw and exposed in the forests near Sochi – the illegal destruction of protected forests and massive contamination of waterways and landfills resulting from construction for the Olympic Games.

END_OF_DOCUMENT_TOKEN_TO_BE_REPLACED

Back in June of this year, our Russian prisoner of conscience, Mikhail Khodorkovsky turned 50 years old. Members of Group 48 wrote birthday greetings and sent them to Mikhail in one packet. About two months later, a letter from Russia arrived in Portland addressing to Group 48. Mikhail responded to our mail! In the age of social media and mobile phones, hard copy letter writing continues to be the only way to reach prisoners of conscience in the farthest corners of the world. 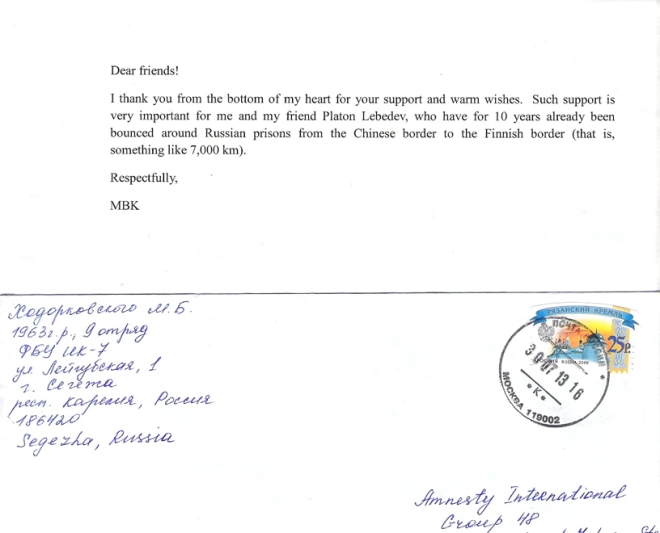 AIUSA Group 48 has been working on the case of Russian prisoners, Mikhail Khodorkovsky and Platon Lebedev for almost a year. We are sending postcards and greeting cards in Russian to both prisoners every month. We thought that our hard work might have a role in the reduced sentence of Lebedev in early August. Our positive outlook was short lived. In late September, the court reversed the decision on the reduced sentence.

While Lebedev’s case went through its twist and turns, the trials and sentence of three members of the punk group Pussy Riot were attracting the world’s attention. The treatment of the musicians in court caused one of them to fall ill. Khodorkovsky and Lebedev experienced the same treatment in their trials. Click here to read Khodorkovsky’s description of his experience in details.

It is evident that the Russian authorities continue to use the same tactics of silencing Khodorkovsky and Lebedev against dissent. We need your help to seek justice for this case. Please click here to sign an online petition now.

The death toll continues to rise in Syria. Hundreds of largely unarmed people have reportedly been killed in the city of Homs alone. The crisis in Syria is escalating. The world must do everything in its power to end the Assad regime’s violent crackdown. Instead, Russia, a country with influence over Syria, appears to be standing by while crimes against humanity are being committed.

Last weekend, Russia, together with China, vetoed a UN Security Council resolution on Syria, crushing one of the last and best hopes of ending the violence that has claimed thousands of lives since March. The resolution — though watered-down — was the closest the global community had come to taking firm action toward ending the violence that has brought Syria to the brink of civil war.

END_OF_DOCUMENT_TOKEN_TO_BE_REPLACED

Until she was bundled into a van and shot dead last Wednesday, Natalia Estemirova had bravely investigated human rights abuses in the Chechen wars, which often put her in the line of fire.

The small but courageous group of human rights defenders in Russia researching war crimes and other abuses in the string of conflicts that have plagued the North Caucasus for decades are all too aware of the real risks they are taking each day.

Estemirova had spent years defying the cruel fate that had recently befallen several of her colleagues. Lawyer and human rights defender Stanislav Markelov and journalist Anastasia Baburova were both shot dead in broad day light in January in the center of Moscow. Markelov was preparing to appeal against the early release of a Russian former colonel sentenced for the murder of a Chechen girl.